Full Disclosure: I am not a paid blogger, but TrueFire does exchange access to their lessons to me for a review per month.

Yup, it’s another course on pentatonic scales, this time offered by jazz guitarist Sean McGowan, and taking some creative steps to applying these ideas to more traditional sounding jazz. The courses start into the familiar territory with pentatonic scales, move quickly into more advanced applications like chromatic sidestepping, and then start applying more unconventional five note scales like the minor six/Kumoi scale, the dominant pentatonic, and the Hirajoshi. I’m still working in this section and am having fun.

From there it breaks into some form exercises with ii – V – Is, to applying some standard changes like for “Autumn Leaves.”

There were a few moments during the breakdowns were I was asking “Yes, that’s a nice sounding lick, Sean, but what are you applying that from?” Overall, though, this is a great set of concepts, and Sean lays them out very clearly.

I don’t make any claims to be a great jazz player (I was decent at being an ensemble player in some big band rhythm sections) despite part of my focus here. My interest is part analysis, part self-improvement, and part sharing what I know.

In other words, I haven’t mastered this piece. This is a “this piece kicks my butt, just like it does most common mortals who haven’t spent years practicing and developing it.” And this is why; but it may help you, too.

There are many analyses of John Coltrane’s Giant Steps online with instructions or suggestions on how to improvise over it. Nearly every one gives some historical context or just explains that it’s a piece requiring a certain improvisational virtuosity to pull off. I’m not going to get to deep into that here, nor do I think anything I’m posting is going to be new except for this visualization I’ve done for it (I’m big on visual learning for guitar and music in general). I’m guessing either you’re familiar with the piece, and me saying “it’s a hard one” is nothing new, or you should Google it.  😉 Find the original studio version with John Coltrane. … All right, maybe this one frequently relayed bit of history:  😉  Trane had been woodshedding it for years before bringing it to the session. Pianist Tommy Flanagan, depending on who is telling the story, was either looking at it “cold” or only had a day or two to look at the piece. OK, now find Tommy’s 1982 trio recording of it. Even with master players, this is a piece that requires practice.

The only other thing I’ll say of many of the other online lessons is 1) don’t put stock in any of the “easy tricks” or what have you; you’re usually just learning a gimmick that will only sound good for a chorus, and may risk making you look worse than usual if you get lost (because you’ll need foundational knowledge of any song if you get lost while soloing. “One easy trick” does not help you on a piece this difficult) 2) I’ve found some analyses that, for whatever reason, show the key centers changing at the bar-line only, which you can “sorta” get away with (good jazz improv definitely does not relying on lining the melodic ideas directly over the changes, for example anticipating the next change melodically) but may just be some folks survival or coping method for the fast changes (Which leans into “trick”, to my way of thinking)

Analysis: I think the best simplified way to look at the piece also shows why it’s hair-tearing maddening to play. The changes are lightening fast, but there’s only three key centers: B major, G major, and Eb Major. The two problems there is that the key never stays put for longer than two bars at any given point in the piece (did I mention it’s usually done very fast) and each time it is up or down a major third… which if you’re used to up or down the circle of fifths modulations, this can easily grind mental gears. (Plus, if you miss a modulation on a circle of fifths, you have technically one bad note you can “fudge” and correct if you’re just floating around. Modulating a major third, you only have three common scale tones. You have to know where, or the harmony will expose you)  The modulations that occur in the middle of the bars in the first half of this piece, making one and a half bar, or one bar over the bar-line V-I and ii-V-Is also go against my previous instincts, even at slow tempos. 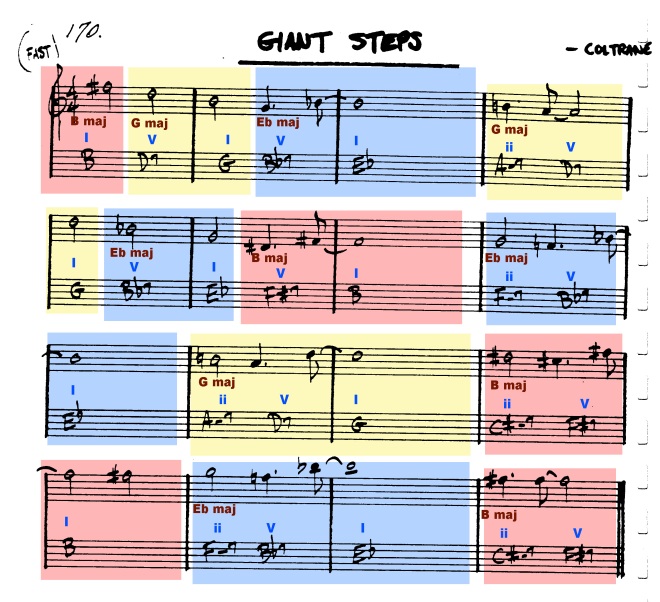 Each of these are just straight V – I or ii – V – I progressions in those three keys. Again, the difficulty comes in the frequent “giant step” modulations and the speed of the piece.

I recently did a video of this for Northwest Guitars, and I may link it when it comes up. Three points to set this up: the first was running across the subject of “Can you swing quarter notes” on a long cold internet discussion, of which the entire consensus compared it to swinging eighths (for those not familiar, not playing straight eighth notes for Jazz tunes, and similar to blues shuffle eighths. The best description that I’ve seen for jazz swing eighths is to imagine an egg rolling end over end down a hill.) and why the entire premise was wrong and not a real thing. While it’s true that in Swing music, quarter notes have even time, I would like to offer a frequently told jazz story.

Both the legendary Count Basie band and saxophone great Charlie Parker came out of Kansas City. But the story goes that Parker auditioned for the Basie band, and the Count put a piece of music in front of all the people auditioning with two measures of the same quarter note. Other than a few people describing it as needing to be a “fat” note, no one telling this tale usually can describe why Parker, THE saxophone player for nearly all jazz-heads, couldn’t make eight quarter notes “swing” enough for the Basie gig  …but it certainly does imply that there is a right and wrong way to do it, yes?

The third stop is that some years ago I took some lessons with Tim Lerch, an astounding guitarist of multiple styles, and a beautiful human being I feel privileged to call friend. I noticed that he had one unusual habit that I never asked him about (in fact this article is the first time I’ve mentioned noticing a tie-in, and I’ll see what he has to say reading this… I think my educated guess is right, but I’m not 100% sure without verification), whether practicing or on the bandstand, he doesn’t just tap his foot, he twists it, alternating right and left, 1 – 2, 1 – 2. And whether he was playing chords, single line melodies or what have you, in any rhythm, his phrasing always had a swing to it, eighths or no.

The simple answer is the back-beat. And it’s also important in blues, country, and most forms of rock (not everything, for example funk is all about the one)

In the army band and for music school I had the opportunity to play for some decent big bands, and learned the Freddie Green four quarter note to the bar comping style pretty solid. Though Freddie didn’t do this, if you watch a lot of other film of big bands from the era, you’ll see guitarists do an exaggerated alternating neck strum – bridge strum, 1 – 2, 1 – 2. Accent the back beat, the two and four: strum STRUM strum STRUM.

That’s Swing Quarter Notes: one TWO three FOUR.  Tim’s (and many others) lines swing no matter the rhythm of the melody not only from perfectly “swung” eighths, but a stress on the backbeat. Try it, pull out a Real Book or other melody chart of a standard from the swing era, like “All of Me.” Rock you foot left and right as you tap quarters, of lightly pencil a mark over every beat two and four. Stress the notes on the two and four (and just the two and four, articulate the syncopations that tie over and triplets normally, …just “think” the two and four fatter right on the pulse  😉   )

I’m still working on getting this to sound natural in my own playing. I’ve found it’s not easy to do all the time if you’re freely improvising (and I admit that get a bit lost in the rhythms of my own phrasing frequently) and overemphasizing can frequently sound as “square” as not doing it at all. But I found not thinking too hard and rocking my foot tapping helps when I practice it.  🙂

Edit – Follow-up quote from Tim: “Nice piece CD, thats how I see it. Not just accent but also I like the 2 and 4 to be just a teeny bit late as well. Well, not late but on the backside of the beat.”